If you wish to post a find, send a pic to the club email. Include a brief description, detector used, and depth. 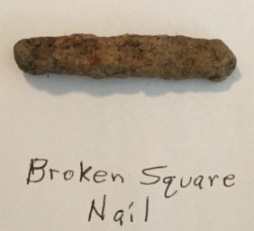 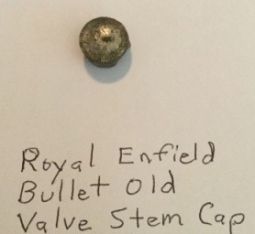 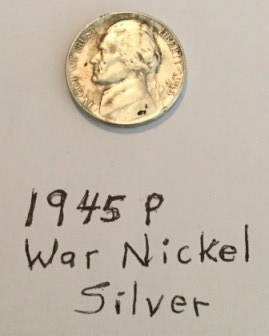 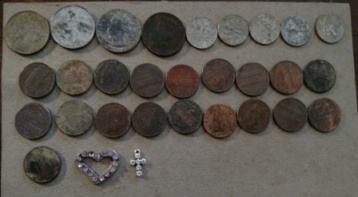 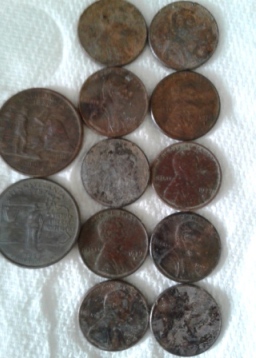 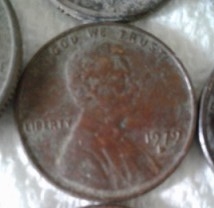 Found by Bill S.: “Stroll-thru-the-park clad coins.
Did you know that Lincoln on the obverse of the one cent coin is the first President to be depicted on a US coin minted for regular circulation? Issued 1909 to commemorate Mr. Lincoln’s 100th birth year. ” 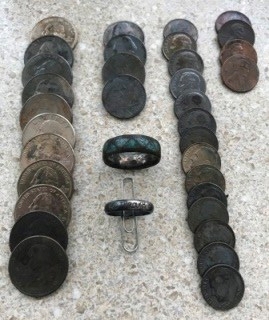 Found by Eric H.: “Special thanks to Jack Kountz for last month’s presentation on underwater detecting. After that meeting I purchased some used diver shoes, a new two-handle scoop and this is the result of my first underwater hunt. The rings (small one is silver) were found in four feet of water. The most difficult part was submerging my AT Pro for the first time. Once I was neck deep, I forgot about it. What a blast! Thanks again, Jack!” 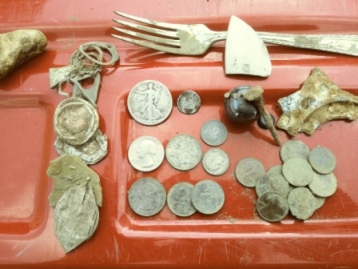 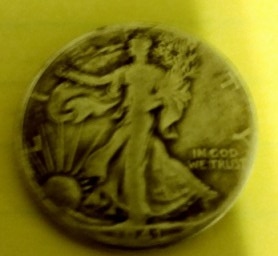 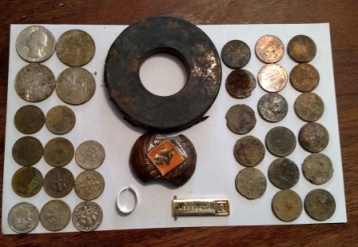 Found by Kathy C.: “Found $2.27 in clad, a 3-inch magnet, a Tiger Cub Boy Scout slide, a kid’s ring, and a Liz Claiborne zipper pull. All with my RadioShack detector, about 2-6 inches deep.” 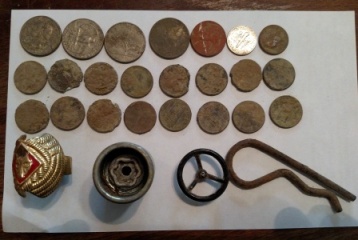 Found by Rick C.: “Found $1.41 clad, a Boy Scout Wolf neckerchief slide, a socket for locking lug nuts on a car, a steering wheel off toy tractor, and a pin, all with my Ace250 about 2-6 inches deep.” 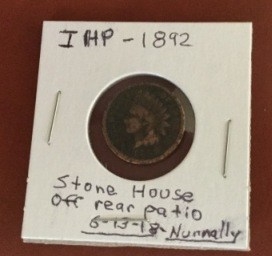 Found by Lee N.: “Went out detecting with Tom R., Marvin G. and Russell B., at a pre-Civil War site. Found an 1892 IHP, 5 inches deep, with an ACE 250. Tom R. found an 1853 dime, not pictured, but relinquished to homeowner. I will be relinquishing the IHP, but I wanted to get a pic first. We used the Genevieve Method. The home owner was more excited about the finds than us, so it is good.” 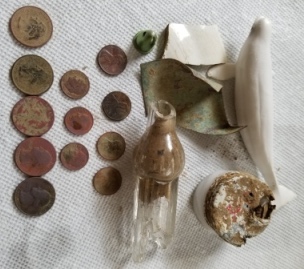 Found by Jim H.: “The older coins were about 7-8 inches down, the newer ones 2 inches. The piece of copper, old bottle, and part of a plate were 8 inches, the small white jar about 7 inches, and the dolphin was swimming on the surface. Found with my Fisher F75.” 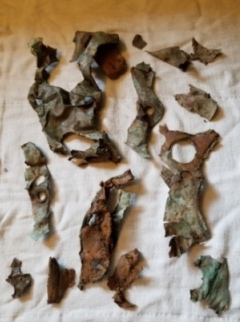 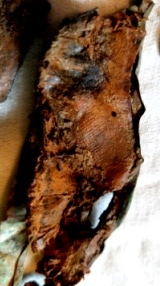 Found by Susannah K.: “Have no idea what this is. Had to do a semi-archeological dig to get it all out as it is pretty fragile. Solid copper with various hole sizes. Holes are rimmed. Inside all the copper pieces are what looks to be canvas. You can see the threads in the picture. Any ideas? Found with XP Deus on Deep program about 9″ down.” 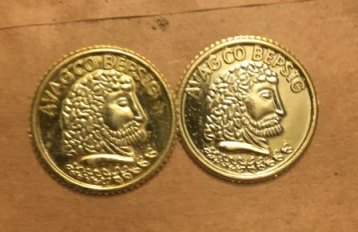 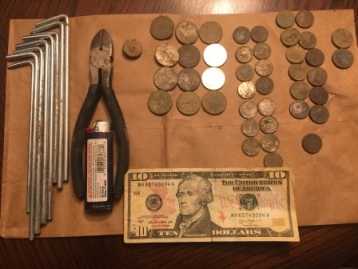 Found by Rob W.: “Found these at a school picnic. It’s a great detector that finds $10 bills! The gold-looking coins are actually tokens. Found with Teknetics T2.” 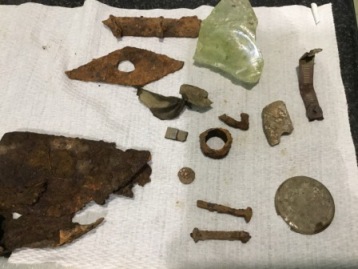 Found by Kathy H.: “Looks like a pocket watch back, part of a miniature figurine, maybe a really old button and the assorted what-not iron and tin and a big hunk of glass!” 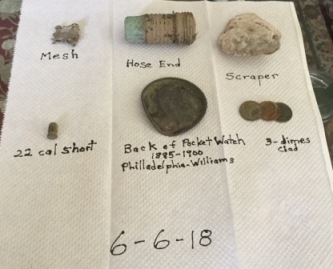 Found by Lee N.: “Went out with Russell B., Tom R. and Marvin G., for 3 separate permission digs. Items shown were dug 2-6 inches deep, with my Ace 250.  Actually, we received a fourth permission, which we will schedule.  Most residents want to know what is in their ground.  Just ask, all they can say is no.” 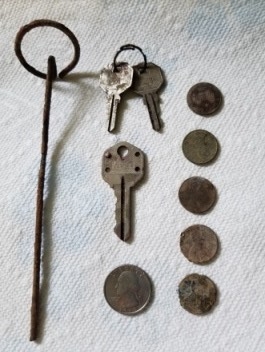 Found by Susannah K.: “Angel’s lost halo, keys to the Kingdom, and the money that Peter robbed to pay Paul.”  Found with my XP Deus on Trash program, 2-7 inches.” 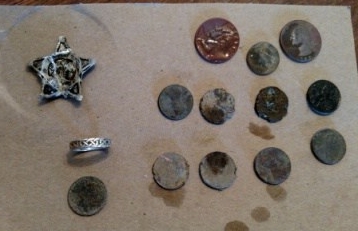 Found by Kathy C.: “Found 69 cents in clad, a toy sheriffs badge, and a silver ring using a Radio Shack detector and found 2-6 inches deep. The ring was under a pull tab.” 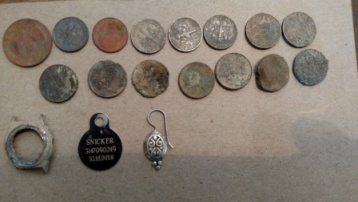 Found by Rick C.: “Found 84 cents in clad, a watch piece, a dog tag with our dog’s name on it and a silver earing from Thailand using my Whites TreasureMaster at 2-4 inches deep.”

This entry was posted in Find of the Month. Bookmark the permalink.